It is well known that the interferon pathway plays an integral role in lupus disease activity. Controlling whether this pathway is active can impact a patient’s experience.

New research published inArthritis & Rheumatology examined the efficacy of anifrolumab, a type 1 interferon receptor antagonist. According to the study's Richard Furie, M.D., of Hofstra Northwell School of Medicine in New York, the study shows anifrolumab is more effective than other medications in inhibiting interferon.

This was a phase IIb, randomized, double-blind, placebo-controlled study of 305 adults with moderate-to-severe systemic lupus erythematosus. Anifrolumab was shown to substantially reduce disease activity as compared to placebo across multiple clinical endpoints in patients. Patients were randomized to receive intravenous anifrolumab (300 mg or 1,000 mg) or placebo, in addition to standard therapy, every 4 weeks for 48 weeks. The primary end point was the percentage of patients achieving an SLE Responder Index (SRI[4]) response at week 24 with sustained reduction of oral corticosteroids (<10 mg/day and less than or equal to the dose at week 1 from week 12 through 24). The primary end point was met by more patients treated with anifrolumab (34.3% of 99 for 300 mg and 28.8% of 104 for 1,000 mg) than placebo (17.6% of 102) (P = 0.014 for 300 mg and P = 0.063 for 1,000 mg, versus placebo), with greater effect size in patients with a high IFN signature at baseline (13.2% in placebo-treated patients versus 36.0% [P = 0.004] and 28.2% [P = 0.029]) in patients treated with anifrolumab 300 mg and 1,000 mg, respectively.

Q: Why did you research anifrolumab’s impact?

A: For decades, there’s been evidence the interferon pathway is active in lupus patients. The natural thing to do when developing drugs is targeting an active pathway, and interferon has three pathways. The first one has five subsets, including alpha-interferon. All subtypes bind to the same receptor. The downfall has been inhibiting one interferon type leaves four others that can signal the same receptor. Previous studies with other drugs, including sifalimumab, provided hope that inhibiting the interferon pathway might work in treating lupus and its associated conditions, such as active renal disease and joint pain.

Anifrolumab was first tested in a scleroderma study in Japan, before testing it with lupus. Results have shown it’s a better interferon pathway inhibitor than sifalimumab because it binds to all five subtypes. Sifalimumab binds to one, leaving four free to activate cells.

Q: What are the clinical implications of using anifrolumab to treat lupus?

A: Anifrolumab blocks the whole receptor pathway responsible for binding all interferon types. In my study, 300 patients participated globally. There were three treatment arms – placebo, low dose (300 mg), and high dose (1,000 mg) that were given against a background of the standard of care, including steroids, anti-malarials, and other regular lupus medications.

Patient were randomized and given intravenous anifrolumab every four weeks for six months. They were evaluated at six months and one year. At six months, the lower dose worked better than the higher dose. And, at one year, the data were even stronger.

Q: What are the main benefits of using anifrolumab for treatment?

A: It takes care of all interferons. If you’re going to inhibit something, generally, the more inhibition you accomplish, the better. Anifrolumab does this. Compared to sifalimumab, inhibition is 50 percent greater with anifrolumab. It approaches 90 percent inhibition while sifalimumab is around 40 percent to 50 percent.

Q: What do you use to define success with this treatment?

A: Lupus is about the most heterogeneous disease there is. A patient can sometimes respond in one domain, but worsen in another. For example, a patient’s skin could get better, but they could go into renal failure. With anifrolumab, patients entered the study with a certain number of SLEDAI points. They also had lab and clinical abnormalities. We tracked their injections, and the results were really dramatic with the skin. Patients with the worst skin disease had an amazing response. We knew from data about alpha interferon inhibitors the skin could be responsive to this approach.

Q: Are there any drawbacks to using anifrolumab?

A: If you look at adverse events, there’s a higher frequency of certain viral infections. This isn’t surprising because interferon pathways help fight viruses. There’s a higher shingles incidence, as well as an increase in upper respiratory infections and influenza. The rates of infection were higher as the dose went up. Other than that, it was well tolerated.

Q: Did you encounter any surprises or unanticipated results throughout the study?

A: The only unanticipated thing was the inverse dose relationship. The lower dose outperformed the higher dose. Is it just a ceiling effect or did we see different numbers because of the low number in each of the arms? I think the latter. The pharmacodynamics showed the doses behave about the same.

We determined 75 percent of the patients at enrollment had interferon gene activity, and 25 percent did not. Looking at the results, we saw a greater effect in patients with a high interferon gene signature. It makes sense anifrolumab would work better in those with active interferon pathways.

Q: How would you anticipate these results to be applied in a patient care environment?

A: Hopefully, this will promote the drug and the studies so people will take a greater interest in looking to participate in research. It’s a lot easier to have this conversation with a patient who has acute lupus and enroll them in a study where you have confidence in the drug. That’s where we stand right now.

Q: What are the main take-away messages about this research?

A: First, the interferon pathway is active in most lupus patients, and we were losing faith after some negative studies that this might be a viable strategy. But, it seems to be now.

Second, anifrolumab is effective for patients with skin disease. It’s especially impactful in those with high interferon gene signatures. Phase 3 studies with more patients will be necessary.

Third, there was a higher shingles frequency, but going forward the lower dose is being studied. Hopefully, we’ll develop a shingles vaccine lupus patients can take. 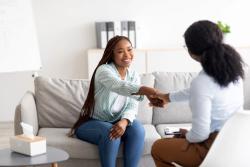