A third of psoriatic arthritis patients do not respond well to TNF-blockers and DMARDs. So there’s an urgent quest for new targeted drugs

Tumor necrosis factor-alpha (TNF-Î±) inhibitors are currently the most effective agents for treating psoriatic arthritis (PsA). However, studies show that up to 30% of PsA patients may have an inadequate or poor response to these biologicals, while others may be unsuitable for or intolerant of TNFi and/or conventional disease modifying antirheumatic drugs (DMARDs).

A newly-published review by researchers at the Centre for Arthritis and Rheumatic Diseases in Dublin, Ireland in the Annals of the Rheumatic Diseasessays there’s a critical need for new PsA treatments, urging a head-to-head clinical trial of TNF-Î± drugs with ustekinumab (Stelara), a humanized monoclonal antibody against the inflammatory cytokines interleukin 12 and 23 (IL-12, IL-23).1

“A head-to-head trial of TFNi versus ustekinumab would be useful to determine the best first choice biologic for patients with PsA,” conclude Carl Orr MD and Douglas J. Veal MD.

“Not enough people gain remission or an adequate state of low disease activity with TNFs, and many lose their effect after a while because of immunogenicity or other factors,” observes Philip J. Mease, MD, director of rheumatology research at the Swedish Medical Center in Seattle and a clinical professor of medicine at the University of Washington. “So we do need a new class of agents, or several new classes of agents.”

Earlier this year, we reported one-year results from the phase III PSUMMIT2 showing that ustekinumab significantly improved PsA.  Other new agents, including the IL-17 blockers secukinumab, ixekizumab, and brodalumab, a fully human monoclonal antibody that targets the IL-17 receptor (IL17-RA), have met with some success in clinical trials.

“This is a pathway we know is very active in PsA, psoriasis, and ankylosing spondylitis. So we’re very excited about any intervention in the IL-17 pathway. And especially when you look ahead, some of the dual interleukin blockers may also be promising,” Mease toldRheumatology Network in an interview during the 2014 annual meeting of the Group for Research and Assessment of Psoriasis and Psoriatic Arthritis (GRAPPA) in New York.

Still, other than the oral phosphodiesterase 4 (PDE4) inhibitor aprimilast (Otezla), approved by the FDA in March, PsA patients must depend on DMARDs or TNF-blockers.

Would a head-to-head randomized clinical trial of a TNF-Î± drugs against ustekinumab, as the Dublin researchers suggest, determine the best alternative?

“My suspicion is that the TNFs would win on several accounts. They would win on the joint counts, probably on radiologic inhibition. They would likely be comparable on enthesitis and dactylitis,” speculates Mease. “TNFs would not do as well in skin as ustekinumab and the IL-17s. And they would lose in other ways. But the difference would be slightly better safety with ustekinumab and slightly better in terms of quality of life.”

If so, already a complex set of choices. Stay tuned: Mease hints that a new IL-6 inhibitor may take the stage at the upcoming American College of Rheumatology (ACR) in Boston this November. 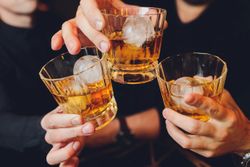 Gender, Not Alcohol Consumption, is Linked to Remission in Patients With Inflammatory Arthritis