The best predictors of developing Sjögren’s in the yearly years after an SLE diagnosis are older age (≥ 25) and the presence of anti-Ro/SSA antibodies, according to a study of 103 SLE patients by Mexican and Canadian researchers.

The best predictors of developing Sjgren’s in the yearly years after an SLE diagnosis are older age (≥ 25) and the presence of anti-Ro/SSA antibodies, according to a study of 103 SLE patients by Mexican and Canadian researchers.

The prevalence of Sjgren’s syndrome (SS) in long-standing systemic lupus erythematosus (SLE) is around 15% -- but is only slightly higher (18.4%) in recent-onset SLE patients, they find.

The patients (93% women, mean age 30.9) are part of a prospective cohort of recent-onset SLE (within the previous year). The study began in 1999.

At enrollment, all patients were assessed for SS using the American European Consensus Group (AECG) criteria, with a sequential approach. Initial screening for SS using the European sicca questionnaire, Schirmer-I test, and a wafer test was followed by confirmation with the fluorescein staining test, non-stimulated whole-salivary flow and serum testing for anti-Ro/SSA and anti-La/ SSB antibodies as well as ANAs. A third factor, lip biopsy, was reserved for those who met specific criteria (including a positive fluorescein staining test and positive anti-Ro or anti-La antibodies).

Screening for SS was positive in 67.9% of patients (n=70), who then underwent confirmatory testing. Of these, 77% (n=54) tested positive for anti-Ro/SSA antibodies. Twelve of the 24 lip biopsies showed focal lymphocytic infiltration.

Almost one-fifth of the SLE patients showed evidence of coexisting SS. Overall, SLE patients with comorbid SS have a higher frequency of anti-Ro/SSA antibodies than those with SLE alone (84% versus 55%).

In this study, among patients with SLE the absence of anti-Ro/SSA, anti-La/SSB antibodies, and rheumatoid factor (RF) are linked with the lowest risk of developing SS. 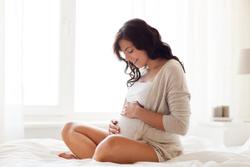