A review outlines recent advances in markers for psoriatic arthritis: Five studies this year alone. A professional society is working toward a panel of soluble PsA biomarkers.

Steady progress is revealing numerous genomic, proteomic, cellular and molecular biomarkers for psoriatic arthritis (PsA), according to a new review.

Writing in the September Current Rheumatology Reports, rheumatologists at the University of Toronto and New York University, report that significant advances in knowledge of new markers for PsA and its outcomes over the past four years.

In particular, B*27 is associated with an interval of less than a year between psoriasis and the development of arthritis, as opposed to more than 10 years with C*06, the review notes.

Some gene variants relate to inflammatory proteins such as tumor necrosis factor (TNF) and the interleukins.

The TNF gene is a “high priority” candidate gene, according to the review, with several variants including TNF-Î± significantly associated with PsA susceptibility, activity, and severity. Other variants may be associated with response to anti-TNF therapy, such as a marker called TNFFAIP3, and provide a potential target.

Recent studies have implicated IL-23 an IL-17/22 producing cells in the pathogenesis of PsA, “suggesting a functional role for this immune response both at the genetic and protein levels,” the reviewers observe.

Soluble biomarkers in serum or plasma may be useful in PsA diagnosis or prognosis, the reviewers report.

VEGF and MMP-3, among others, are also being evaluated as predictors of therapeutic response. One study found that a panel of several biomarkers appears to be a stronger predictor of clinical response to golimumab (Simponi) than CRP alone.

As we reported earlier this year, the Group for Research and Assessment of Psoriasis and Psoriatic Arthritis (GRAPPA) is working to develop a panel of soluble biomarkers of joint damage for a future assay.

Along with CRP and MMP-3, GRAPPA’s candidate markers for early joint damage include serum amyloid A (SAA), collagen breakdown markers such as C2C, C1-2C and CPII, and receptor activator of nuclear factor kappa ligand (RANKL).

Chief among the cellular biomarkers for PsA are circulating osteoclast precursors (OCPs), which may also predict disease severity and response to therapy, says the review. Bone changes are a key component of PsA and preventing bone deformities is a key goal of therapy.

Biomarkers in synovial tissue and fluid are being investigated primarily as indicators of response to PsA therapy.

Again, these include CRP as well as erythrocyte sedimentation rate (ESR), which correlate to selected interleukins. For example, after synovial injections of etanercept (Enbrel) there are reductions in white blood cell counts and cytokines such as IL-6 and IL-23, as well as reductions in disease activity indexes and synovial tissue markers.

The next step in this research, validation of some or even all of these biomarkers, will occur in the not-to-distant future, the review predicts. 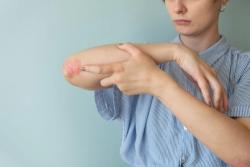