A Weeping Wound with Ragged Edges and a Putrid Odor

At the very start of my fellowship, during my first outpatient clinic in an inner city hospital, I found myself staring at a raging pyoderma gangrenosum.  A wound that was angry-appearing with ragged edges, putrid odor and weeping as I peeled off the dressing. A pleasant middle-aged female patient told me her story with profound understanding and high regard for the medical trenches.

This patient was 55 years old with a history of benign hypertension when she began developing simple infections on her left lower extremity. Presumably thought to be a benign infectious process, she was treated with oral antibiotics. The lesion waxed and waned, but eventually stopped responding to oral and then intravenous antibiotics. She frequented multiple specialists, each with a myriad of both conservative and aggressive therapies directed at a wide differential. Shortly afterwards, she underwent surgical wound debridement.

In the beginning stages, it seemed promising with the tissue showing signs of healing and improving. However, the wound soon grew large enough to encompass almost the entire circumference of her leg, a mere few inches above the malleoli.

Shortly afterwards, she was diagnosed with pyoderma gangrenosum and given yet another cocktail of medications, each leaving their own imprint. After a trial of antibiotics, steroids, other immunosuppressive agents, she was prescribed thalidomide. The hope was that by decreasing angiogenesis, the lesion would decrease in size and wrath. But once again, the patient drew the short stick as her wound became more inflamed and weepy. Cyclosporine landed her in the hospital for a bout of pancreatitis. With multiple unsuccessful treatment plans, she worried about the possibility of having her leg amputated.

After many years, she was started and is currently undergoing, active IVIG treatment. This has proven to work the best in her case. Her immune response has been remarkable. At last clinic visit, her lesion had profoundly improved. She comes armed with her own gauze, sterile dressings and saline bottle to every single appointment. She has mastered the art of changing her bandages and continues to embark on life’s daily adventures generally unscathed.

Pyoderma gangrenosum is a rare, painful cutaneous disorder thought to cause ulcerations after a small trauma or inciting event. Though the etiology is not well understood, it is hypothesized as dysregulation of the immune system. Surgical debridement is not favored as it can worsen the underlying auto-reactivity. While there is no gold standard for cure, each patient needs to have their treatment tailored precisely until improvement.

Irina Litvin, D.O., is a physician and rheumatology fellow at SUNY Downstate in Brooklyn, N.Y. 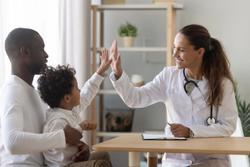