As physicians we rely heavily on the physical exam to help compose a top notch differential. We trust our senses to help lead us in tough cases. As rheumatologists, every nail bed and skin fold serve as potential clues in guiding us to a diagnosis. What happens when the physical exam leaves questions unanswered? Here is a case of a young male with clinical manifestations that fit multiple disease patterns.

Patient is a 46-year-old male with uncontrolled hypertension and long-term Raynaud’s phenomenon presented with altered mental status, facial droop, dysarthria and diplopia. Initial diagnostic work-up revealed acute hemorrhagic stroke, unclear if hemorrhagic transformation of infarct versus primary, as well as hypertensive emergency. He was admitted to the intensive care unit with aggressive control of blood pressure. Once stable and improved, patient was downgraded and subsequently discharged to a rehabilitation facility.

Several weeks later, patient presented again with uncontrolled hypertension, bizarre behavior, dysphagia and memory deficits with involuntary limb movements requiring readmission to the ICU. This time, suspicion was raised for possible autoimmune encephalitis.  A lumbar puncture was performed but was limited due to the small sample received. He was treated with pulse-dose methylprednisolone and IVIG over the course of hospitalization with some clinical improvement. While his mentation improved somewhat, his blood pressure continued to be of high concern. A detailed serologic workup revealing RNA polymerase three antibodies and was diagnosed with scleroderma sine scleroderma (ssSSc) with renal crisis.

Scleroderma sine scleroderma is a published entity with numerous case reports in medical literature.  It is thought that approximately 10 percent of those diagnosed with systemic sclerosis do not have obvious skin induration, thus referred to as “sine scleroderma.” Renal involvement in systemic sclerosis has a poor prognosis, and in combination with underlying Raynaud’s, can cause cerebral vasoconstriction and ischemic changes. There is no indication for steroid treatment in these patients, and the treatment is maximizing angiotensin-enzyme inhibitors and calcium channel blockers in hopes of increasing vessel dilatation.

Irina Litvin, D.O., is a physician and rheumatology fellow at SUNY Downstate in Brooklyn, N.Y.

The red arrows highlight the diffusion sequence imaging of two ischemic cerebral events, simultaneous and in separate parts of the brain. 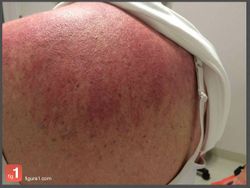 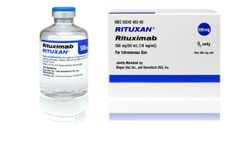