Between the Lines: New Treatment Paradigms in Gout - Episode 5

Infusion Reactions and Impact of Immunomodulators in Gout

Orrin M. Troum, MD: One thing I mentioned earlier was the potential for infusion reactions. These infusion reactions with pegloticase, which people are so concerned about early on, happened in just over 25%, and over a quarter of the patients are on pegloticase. What steps do you take—and it’s part of how you use the medicine—to reduce the likelihood or manage them effectively when they occur prior to starting a patient on pegloticase? You talked [about the use of immunomodulation], and I mentioned it with this study. But just before the infusions, what do you do?

Jeff R. Peterson, MD: I want to point out that with the use of immunomodulation, the infusion reactions have impressively gone from 24% to less than 4%. In my practice, it almost never happens. I’ve gone to less than 1%. By using immunomodulation with Krystexxa [pegloticase], you get double the efficacy and 5 times the safety. It’s a no-brainer.

Jeff R. Peterson, MD: What I do for those patients before treatment is we always have them on antihistamines. We use some steroids, although we’re trying to lower that dose so that our patients with diabetes aren’t getting overloaded with steroids. Dr Botson and I are working on a protocol about how to get lower levels of steroid injection before the infusion. If a patient has had a problem with a slight infusion reaction in the past, we’ll go a little slower on the infusion. In general, patients do really well, especially using immunomodulation. It’s becoming a nonissue.

Orrin M. Troum, MD: That’s an important point because when this medicine came out—like a decade ago—

Orrin M. Troum, MD: There was a big concern.

Orrin M. Troum, MD: Yeah, the reactions were termed that from the FDA because it’s a safety organization. They want to make sure people are aware. As you know, of the people who had those anaphylactic reactions, nobody was hospitalized, was put on a respirator, or died.

Orrin M. Troum, MD: They kept the drug and slowed the infusion. That was important, but it wasn’t the message that got out. The message that got out was, “If you use this medicine and you’re doing this in your own office, watch out. That’s mitigated by the fact that we’re using methotrexate now. That’s approved, and the FDA has included it and allowed Horizon Pharmaceuticals to include in the label. That was a good thing, because many other rheumatologists will have seen the data or have heard this. They will understand that this is an improved way to utilize this medicine. As you pointed out, it increased efficacy not just by doubling it, in essence, but by decreasing the risk of infusion reactions, which is significant. We covered most of this discussion about the MIRROR RCT trial. Are there any other take-home messages or other implications that you took from the paper and by participating as a senior author?

Jeff R. Peterson, MD: Thank you, Orrin. In this whole process, it’s been gratifying knowing that there was this problem with my patients and that there’s a medication that we can do better with. Dr Botson and I came up with the idea in our offices, and I must point this out, the study was funded by the Alaska Rheumatology Alliance, which is a nonuniversity, nonpharma company. It’s just regular docs in the trenches doing what they think is right for patients. To see this come all the way to a label change is very gratifying. I’d love for all patients with gout to get adequate therapy. I’d like better education, so we know that patients with gout have opportunity to get a full recovery. I don’t want to see anybody disabled anymore. I certainly don’t want to see any more patients die from comorbidities of gout.

Orrin M. Troum, MD: I appreciate your time. Hopefully this will be a nice addition to the Rheumatology Network™ programs. Thank you very much, and thank you to everyone for attending.

Between the Lines: New Treatment Paradigms in GoutGout 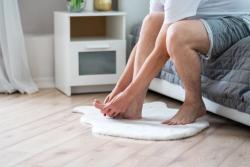