Only 60 percent of patients with rheumatic disease are treated by a rheumatologist, 90 percent have health insurance, but 60 percent struggle to pay for healthcare expenses, survey shows.

A national patient survey released on September 13 by the American College of Rheumatology shows that people with rheumatic disease face significant healthcare challenges, including difficulty affording treatment, undergoing step therapy, and activity and lifestyle limitations due to their disease.

The ACR previously examined access, affordability, and lifestyle challenges, and graded the 50 states and the District of Columbia on the factors associated with the ability of a person with rheumatic disease to live well. The 2019 Rheumatic Disease Patient Survey was conducted to provide additional information on such challenges by asking patients directly how their disease impacts daily life.

The survey was conducted using an online polling tool on June 28 - 29, among a nationally representative sample of 1,517 participants aged 18 years and older with rheumatic disease. The survey asked a range of questions related to healthcare access, affordability and lifestyle.

According to the findings, 90 percent of respondents reported having health insurance coverage, but 60 percent said they had difficulty in the past year affording their medications or treatments. Almost half of respondents receiving treatment for a rheumatic disease were subjected to step therapy by their insurance company. Additionally, one-quarter of patents reported out-of-pocket treatment costs greater than $1,000 per year, while six percent of patients reported such costs of greater than $5,000 per year.

The survey also found while that around 60 percent of respondents are currently being treated by a rheumatologist or had referred to seek such treatment, two-thirds had to wait more than 30 days from referral before receiving an initial appointment.

“Although there is no cure for rheumatic disease, early intervention and diagnosis by a rheumatologist can help patients manage symptoms and lifestyle limitations to live healthier and more active lives,” the ACR wrote.

Moreover, almost two-thirds of patients reported that their rheumatic disease limited their ability to perform simple tasks such as cooking, eating, getting dressed or running errands.

“These findings make clear that Americans living with rheumatic disease – regardless of age, gender, or income level – struggle to find affordable care. To address these challenges, it is crucial for patients, clinicians, and policymakers to work together to improve access to rheumatology care so that patients can live longer, healthier, and more fulfilling lives,” said Paula Marchetta, MD, MBA, president of the ACR.

According to the Centers for Disease Control and Prevention, one in four people in the U.S. have a rheumatic disease, which are the nation’s leading cause of disability and generate $140 billion health costs each year. 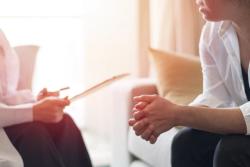