The study, published in the Annals of the Rheumatic Diseases, reported that psoriatic spondyloarthritis (PsSpA) shares features of both psoriatic arthritis and ankylosing spondylitis, including axial arthritis, peripheral arthritis and enthesitis. Prior comparative studies are few and often of small sample size; findings have not been entirely consistent.

To further define similarities and differences, and to see if these could be explained by clinical and genetic parameters, Jadon, et. al. prospectively compared the prevalence, clinical and radiographic characteristic of PsSpA in psoriatic arthritis with AS in 402 cases (201 with PsA; 201 with AS).

The authors emphasized, “PsSpA is not a clinically less impactful form of AS,” pointing out that measures of disease activity (ASDAS, BSDDAI, PaGA), disability (HAQ) and metrology (BASMI) were high among psoriatic spondyloarthritis and AS cases, without statistically significant differences between them. Peripheral arthritis was observed in 74% of PsSpA cases, and erosions were observed in 64% (48/75) of those with available radiographs. The additional burden of peripheral joint disease, therefore, may have influenced some of the measure.

The finding that psoriatic spondyloarthritis is part of the SpA spectrum and that it is associated with similar disease burden as ankylosing spondylitis (AS) despite less radiographic severity, the authors concluded, “may be of relevance in the development of future treatment guidelines.” They note further that “PsSpA may represent a distinct endophenotype influenced by factors related to the presence of psoriasis, psoriatic nail disease and HLA-B*27 variants.”

Because the study was conducted in a secondary care hospital among unselected psoriatic arthritis and AS referrals, the findings may be considered to be generalizable, Jadon, et al. suggest. Finally, future research will explore whether genetic variants are linked closely with more homogeneously defined disease patterns. 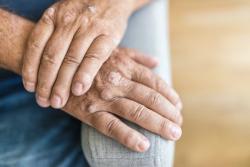 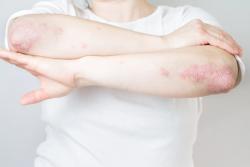