In a study of 571 patients from two clinical trials and 1,693 patients from a 10-year longitudinal study, I.C. Scott of Keele University, Staffordshire, UK, and colleagues assessed the frequency and sustainability of remission and low disease activity/remission in these patients.

The study appears in the August print issue of Seminars in Arthritis and Rheumatism and was originally published online December 28.

“Our findings support both the treat-to-target goals. Attaining remission is highly specific for attaining low disability and normal HRQoL (health-related quality of life), although many patients with more active disease also have good function and HRQoL. Attaining a DAS28-ESRâ¯of 3.2 or less has a better balance of specificity and sensitivity for attaining these outcomes, with the benefit of being more readily achievable. Although sustaining these targets over time is rare, even attaining them on a one-off basis leads to better function and HRQoL outcomes for patients,” the authors wrote.

Two different goals have been identified as treat-to-target goals in rheumatoid arthritis, low disease activity and remission. Different levels of disease activity define both goals with remission nearly always being associated with improved health-related quality of life and improved function. However, using remission alone decreases the sensitivity for identifying patients with active disease who have also reached levels of improved function and quality of life.

One consideration that stimulates ongoing debate over which target is more appropriate is which goal is most achievable in routine practice. Setting a target that is rarely reached is of little utility in clinical practice.

A second consideration when choosing a target is which goal best identifies patients with rheumatoid arthritis who achieve good function and normal health-related quality of life. Being relative and somewhat subjective, functional improvement and high quality of life may exist in patients not in full remission.

The authors did a secondary analysis of two clinical trials looking at patients with early and established rheumatoid arthritis. A secondary observational study was performed along side the retrospective analysis following patients managed according to the treat-to-target principles.

The authors found that point remission and periods of low disease activity were common but rarely sustained.

While disease course varied widely after achieving remission or low disease activity, more than half of patients were in remission at study end-points.

Remission was a predictor of low disability and normal health-related quality of life but not very sensitive for uncovering the same endpoints. Poor sensitivity results in failure to identify people with active disease but good function and quality of life.

While intermittent low disease activity or remission are better than none at all, sustaining these targets is quite rare in the real world. Treat-to-target is clearly successful in reaching these goals even if not for the long-term.

While Dr. Scott reports that this study provides strong evidence that both low disease activity and remission are valid targets for treatment in rheumatoid arthritis he cautions that, “as many patients will not attain remission or low disease activity, and will continue to have disability and poor health-related quality of life, there is a strong case for developing alternative treatment strategies for these non-responders. ”

One potential flaw in treat-to-target strategies is the lack of agreement with regards to follow-up frequency. When new drugs are introduced or doses changed, effects may not be fully realized for months. Clinicians should establish clear follow-up intervals and encourage compliance with patients reassuring them that improvements may come after a period of time.

Remission will remain the ultimate goal of therapy in rheumatoid arthritis. However, patients should be encouraged to honestly report their functional status and perceived quality of life even if disease activity scores tell a different story.

The authors conclude that treat-to-target has revolutionized the outcomes of patients with rheumatoid arthritis even if there still exists debate over which target is best.

Striving for the most attainable goal, which in this case is low disease activity score in twenty-eight joints with erythrocyte sedimentation rate of approximately three point two, appears to provide the best combination of sensitivity and specificity where good function and patient quality of life are concerned.

Clinicians should have a frank discussion with their rheumatoid arthritis patients in an effort to determine how effective they believe their treatment is. Patients should be encouraged to be honest about how they feel even if tests and observations are not congruent with their perceptions and treatment plans should be tailored to the individual based on agreed upon goals.

I.C. Scott, F. Ibrahim, G. Panayi, et al. The frequency of remission and low disease activity in patients with rheumatoid arthritis, and their ability to identify people with low disability and normal quality of life. Seminars in Arthritis and Rheumatism 49 (2019) 20_26. https://doi.org/10.1016/j.semarthrit.2018.12.006 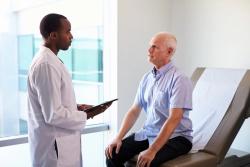