A 43-year-old Caucasian lady presented to our institution for evaluation of chronic low back pain. In the course of obtaining her history, she reported joint pain and swelling involving the hands, wrists, knees, and feet associated with low back pain since the age of 20. She initially attributed the lower-back pain to her job, during which she was working as a medical assistant in a nursing-home facility. She was diagnosed with a herniated disc at the age of 37 with no preceding injury and underwent lumbar hemilaminectomy. Post-surgery, she did not notice any improvement of her low back pain and continued to have symptoms that interfered with her daily activities. She describes the low back pain as constant and sharp, relieved by activity and exercise with marked improvement on daily oral naproxen. She also reports morning stiffness in the lower back lasting for about one hour, which interferes with her sleep pattern and improves throughout the day. Review of previous records showed a pelvic X-ray that was remarkable for significant degenerative changes and was diagnosed with mechanical lower-back pain. A review of systems was significant for fatigue, unintentional weight loss of 20 pounds over a 6-month period, sicca symptoms, and plantar fasciitis. She reports no night sweats, fever, chills, hair loss, history of uveitis or pain or redness in the eyes, vision loss, nasal crusting, hearing loss, malar rash, photosensitive rash, oral or vaginal ulcers, Raynaud’s phenomenon, pleuritic chest pain, cough, shortness of breath, hemoptysis, hematuria, abdominal pain, weakness in the extremities, numbness, tingling in the upper extremities or recurrent falls. No reported history of sexual transmitted disease, psoriasis, miscarriages or blood clots. Her family history was significant for ankylosing spondylitis reported in her father, osteoarthritis in her mother and psoriasis in her brother. She is a smoker with 0.25 PPD, and consumed alcohol socially and denied any illicit drug abuse. She was sexually active with men and uses condoms for contraception. Her home medications included as needed oral naproxen 500 mg twice daily over the last five years.  On physical examination, she was alert, afebrile with a blood pressure of 145/81 mmHg, pulse of 82 bpm and a BMI 34.06 kg/m2. The musculoskeletal exam revealed a full range of motion at the shoulders and elbows with bilateral wrist joint tenderness with no effusion. Bilateral MCP tenderness which was associated with joint effusion at the PIP’s bilaterally. She was unable to make a tight fist bilaterally. The patient did show discomfort with FABER test at the gluteal region. Point tenderness over the sub trochanteric area. Full range of motion at the knees and ankles with no features of synovitis. There was no bilateral MTP or enethesial tenderness. There was no para spinal or spinal tenderness at the cervical and thoracic regions. There was a surgical scar at the lumbar area as well as para-spinal tenderness in the lumbar region. Schober’s Test showed 8 cm of flexion and a finger to floor distance of 10 cm. Head to wall distance was 0 cm. Rest the physical exam was within normal. Further blood work-up revealed an elevated white blood cell count, CRP and sedimentation rate and a positive HLA-B27. Ultrasound of the hands, wrists, ankles and feet revealed features of bilateral synovitis and minimal synovial proliferation without underlying erosions at the dorsal aspect of the MCP’s(3-4th), PIP’s(2-4th), wrists, feet and ankles. There was no evidence to suggest enthesopathy about the bilateral ankles. X-ray of the pelvis was remarkable for significant inflammatory changes at the symphysis pubis with subchondral erosions and sclerosis

A diagnosis of AS involving the symphysis pubis was established, and she was started on tumor necrosis factor alpha blocker Adalimumab 0.8 ml subcutaneous injection every 2 weeks.  Four months after initiating TNF-blocker there was a marked improvement in her fatigue and joint symptoms with norm alization of her inflammatory markers.

In the perspective of the clinical scenario patient was diagnosed with AS attributed to the following findings: chronic low back pain with an inflammatory pattern, elevated inflammatory markers, US revealing features of synovitis in the peripheral joints with an X-ray and MRI of the pelvis revealing sclerosis and marked erosions in the symphysis pubis. AS is a chronic seronegative asymmetrical polyarthritis involving primarily the sacroiliac joints and the axial skeleton. Additional manifestations include oligoarthritis of the hips and shoulders, enthesopathy, and anterior uveitis. The male-to-female ratio of AS is on average 2:1 to 3:1, and literature alluded that it is more a male disease, however, in a national survey in the US, there was no significant difference in prevalence between men and women[1]. Cross-sectional studies have suggested that cervical involvement is more frequent in women, and lumbar involvement more frequent in men[2]. Symphysis pubis involvement was reported in four out of 43 females (9.3%), in a study comparing the radiographic differences between both genders in AS [2]. Interestingly in the same study none of the males had involvement of the symphysis pubis.  According to the 2009 ASAS classification, our patient fulfilled 5/5 of the features required. When the ASAS modification criterion was applied to the same patient which was established in 2013 utilizing the Berlin algorithm [3] she fulfilled ≥ 4 features, including heel pain (enethesitis, positive family history, marked response to anti-inflammatory medications and marked elevation of acute phase reactants. This indicates even though the ASAS criterion was established for research purposes it can be utilized in aiding in the clinical diagnosis of AS. To our knowledge since Scott et al. in 1979 [4] reported the involvement of symphysis pubis in females more than males to our knowledge there were no other case reports since then which makes this case unique as the only axial manifestation involved the symphysis pubis without involving the sacroiliac joint which is a rare described entity. 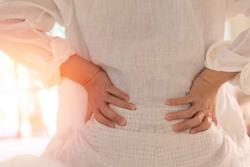